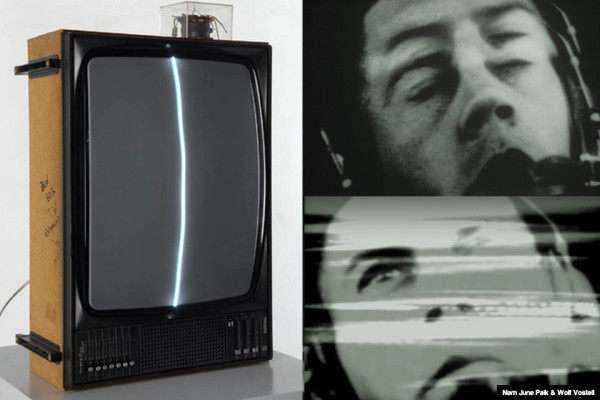 «The Swiss Confederation represents an ancient construction of diverse communities which have succeeded in recognizing their common interests while respecting their special characteristics.» 1

The history of video is a complex one created in the middle of the crisis of modernism. Although the golden age of video art belongs to the past, its traces are very much present, transformed and produced today. The term video was introduced in the French dictionary in 1960. Video became a cultural phenomenon and was taken on, as an instrument of experimentation and then creation in its early beginnings.

Theorist, scholar and author of media arts and politics, Gene Youngblood, was the first to consider video as an art form in his book, «Expanded Cinema», published in 1970. His book was influential in establishing the field of media arts.

The United States opened the way, soon followed Canada and then Europe. Although the practice of video art goes back to its commercialization in the sixties with the first portable video player, René Berger, Swiss writer, philosopher, art historian and director of the Musée des Beaux-Arts de Lausanne, explored the first Swiss interest for this emerging technology in the seventies. He was one of the first ambassadors of video in Switzerland.

In 1971, Berger gave a new lecture at the University of Lausanne on the Aesthetic of Mass Media. He had a class of five students, all artists coming mainly from the visual arts, interested in the exploration of this new medium. He affectionately called his new group «les mousquetaires de l’invisible’. It was composed of René Bauermeister, Jean Otth, Janos Urban, Muriel Olesen and Gérard Minkoff.

Berger was also president of l’association internationale des critiques d’art. He knew American artists like Frank Gillette, Nam June Paik, Bill Viola and Peter Campus, all starting to use this new medium. He decided to organize in 1974, «Impact Video Art» at Gallery Impact in Lausanne showcasing for the first time, video art in Switzerland.

In its beginnings, artists were asking themselves questions about what is sound, what is an image and what is an electronic signal? The 1975 video «Portrait de René Berger» from Jean Otth, is a good testament and shows Otth trying to understand the meaning of representation in video disturbances. Coming from a painter’s background, Otth wanted to find out, how to get the representation out of this new TV set. The abstraction of this new formal exploration titillated his painter’s eyes.

The formalities of the first video productions were sulking by the public and an object of curiosity for many artists. Nam June Paik’s performance/installation at the Parnass Gallery in 1963 in Wuppertal, Germany, was a marking point for others to engage with this new medium. Paik played with pianos, monitors that were being feed by TV sets distorted by frequency generators that played the role of the signal. 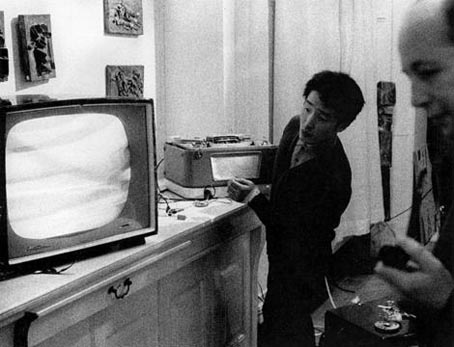 Back in Switzerland, artists Chérif and Sylvie Defraoui were among the first Swiss to think the existence of the virtual. «Cartographie des contrées à venir» (1979) is the first video installation of the Defraoui. It marked a turning point in their work on how video was conceived (http://www.newmedia-art.org/cgi-bin/show- oeu.asp?ID=O0019269&lg=FRA).

In the German part of Switzerland, Diego and Gilli Stampa, owners of the Stampa Gallery, were the first to showcase video at the Art Basel in the beginnings of the seventies and for several years, responsible for the video, film and performance program of the fair.

René Pulfer, artist, curator, institute director and professor of the video and media art class at the Basel School of Design was a key player in the development and delivery of Swiss Video art in the 1970s and 1980s in Switzerland.

He co-founded with Reinhard Manz Videowochen im Wenkenpark in Riehen, an art video festival that took place in the years 1984, 1986 and 1988 in Basel. Artists like Gary Hill attended the festival with his video performance «Soundings» (http://vimeo.com/5596880 ), giving also workshop to Swiss artists.

Like the Atelier média mixtes from Chérif & Silvie Defraoui at the Ecole supérieure d’art visuel in Geneva, René Pulfer taught to students like Pipilotti Rist, Muda Mathis (http://www.mathiszwick.ch/?m=1&show=13) and many others that went on to work professionally with the medium. 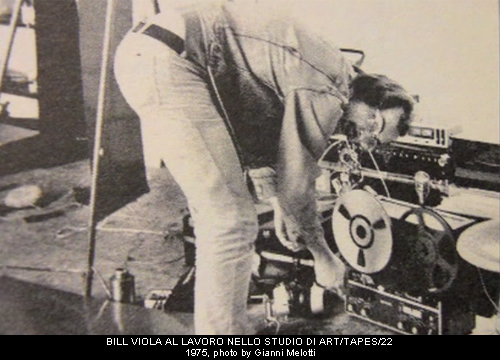 Switzerland’s neighbour, Italy, was also sustaining through Art/Tapes/22, the first comparative exhibition of video works by Americans and Europeans. Art/Tapes/22 was the first production and distribution studio that promoted over 150 artists videotapes including the Swiss.

The city of Locarno became host to the Locarno Video Art/International Video & Electronic Art Festival (1980-1999) and an international meeting point showcasing national and international video works. Rinaldo Bianca, director of the festival, had put together a commission of professionals looking at works together: «Barbara London from the Museum of Modern Art of New York, Dorine Mignot from the Stedelijk Museum in Amsterdam, Bianda Wulf, director of the Kunsthalle Bremen, Helmut Friedel, director of the Lenbachhaus in München, Christine van Asche, manager of the video centre of the Centre Pompidou in Paris and Ursula Perucchi-Petri from the Kunsthaus Zürich.» 2

The idea of the professional video artist was recognized during this period. The electronic techniques evolving, festivals started blooming all over the world. Born in 1985 as the Semaine Internationale de vidéo, la Biennale de l’Image en Mouvement (BIM) in Geneva was one of the oldest and most important events in Switzerland and Europe to present video, films by artists and multimedia.

The VIPER International Film, Video and Multimedia Festival (1980-1999) was one of the major European video reference festivals. Based in Lucerne, it showcased video art from Swiss and international artists. The collection of this festival resides today in the offices of the Institute Design& Kunst of the Lucerne University of Applied Science and Arts.

Lucerne saw also in the early nineties the establishment a video course at the Lucerne University of Applied Science and Arts that grow into a three-year Bachelor Video in visual communication. Their program focuses on the transgression of the genre and the development of the creator’s vision (www.video.hslu.ch).

The evolution of video is tightly linked to its production development. The artists first experimented with the medium, and then came the development of diverse aesthetics for single channel works and video installations.

The art world took notice of video art at first through the endeavours of individual interested in it’s language. Ursula Perucchi-Petri, Head of the Graphic Arts department of the Kunsthaus Zurich in 1979, drew from a growing knowledge during an extended stay in New York, an enthusiasm for video still at its infancy stage. She built over the years at the Kunsthaus a renowned video collection. With exhibitions, summary publications, video programs and seminars, she pioneered the enforcement of the medium in Switzerland. This collection grew to become one of the biggest today in Switzerland with over 1’500 titles.

In the beginning of the 1990s, the question of how to show video became important. «The stenography of video in the public institutions paved the way for the recognition of the medium as an art per se.» 3 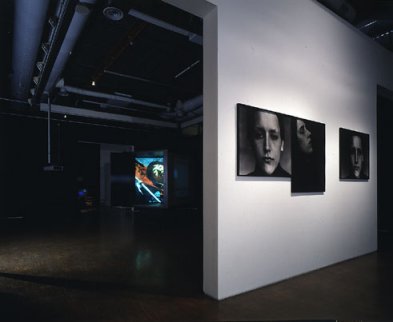 Many artists were also concerned with the passages between the image and the transformative power of video. Technology rapidly evolved during this decade, having an impact on the medium and its users. Raymond Bellour, French research director at the CNRS, critic and theorist of literature and cinema published in the 1990, «L’Entre- Images: Photo. Cinéma. Vidéo, une réflexion sur les passages entre les images, sur le pouvoir de transformation des images vidéo». The same year, he was commissioner with Christine Van Assche and Catherine David for the famous exhibition Passages de l’image at the Centre Georges Pompidou in Paris. This exhibition was devoted to images from contemporary photography, film and video and sought to identify areas of interaction between the three mediums.

In Switzerland like in other countries, the integration of the video image in the art world took time to gain its artistic legitimation. Artists had to find ways to integrate the moving image in the art milieu and find its specificity. Nam June Paik said already in the seventies that the «video art of tomorrow would be installation were we would have to get acquainted with the new code of the new art». 4

The artists and institutions started presenting installations in museums as well as in art fairs. Swiss artists like Roman Signer, Alexander Hahn, Pipilotti Rist, Sylvie Fleury, Peter Fischli and David Weiss, Thomas Hirschhorn, Ugo Rondinone and Gianni Motti were one of the first to travel with their installations works.

Video flourished over a span of 25 years but no direct Swiss public governmental funding for its distribution was ever truly developed. Most artists working with video in Switzerland do not have still today gallery representation. They became by necessity self-sufficient in the promotion of their work through other subsidiary like the festival circuit. They also formed art collectives to help support their production endeavors. Available to them were and still are cantonal and city production grants. Some prizes are given mainly to the under 40, for the next generation. Some private foundation decided in the nineties to grant their support to artist working in video.

Pro Helvetia, the Swiss national foundation dedicated to promoting Swiss cultural endeavours nationally and internationally started supporting the presentations of video installations in exhibition contexts. The Swiss promotional agency swissfilms took over the crossover territories of festivals without specifically having a dedicated section for video.

There isn’t an established distribution network in Switzerland for video art except for the work of videocompany who has 25 years experience in dealing with production and technology in video art, founded in 2003, videoart.ch a Swiss distribution platform for single channel unlimited works. Beside videoart.ch, there is in Bern, videokunst.ch that strives to establish itself as a competence Centre for video art for some years. Their main focus is collecting and online viewing of the medium.

The arrival of the lightweight production equipment and the Internet doomed video to be taken in the big numeric family. This digital video «revolution» gave wide access to sophisticated editing technology.

Games and computer systems partnering with the World Wide Web had a direct impact on the production of video. The different ways to deal with the notion of time is addressed through the issue of the re- inventing, re-looking and re-defining. Swiss artist Eric Lanz addresses this issue of the aesthetics of disappearance in his video Les Outils 2, 1991

Françoise Parfait talks in her book «Video: un art contemporain» of conceptual video opening up to something new, moving towards the numeric field. This new technology brought some answers regarding the preservation of our memories but at the same time, precipitated us into the act of abandonment. The digitalization of video brought up question regarding the restoration of our video memories.

Initiatives and projects in Switzerland have been put forward like the work done by Memoriav as well as the ongoing work of Swiss specialist Agathe Jarczyk with her atelier videokonservierung in Bern (http://videokonservierung.ch). More recently, she co-wrote the new publication, a Compendium of Image Errors in Analogue Video, providing curators and other caretakers with practical advice on viewing, cataloguing and assessing the condition of the analogue videotapes in their art collections.

The Internet offers constant live streaming access. The arrival of this dissemination possibility raised issues of quality, control and copyright were many had to rethink their promotional strategy and distinguish themselves from all non-professional content online. The development of the speed of information and its veracious consumption leaves behind our memory of our time, place and interactions. Artists have challenges, building their own digital traces.

Video art has gone through many developments and crisis since its early beginnings, by challenging the conventions of commercial TV, giving birth to a new aesthetic, its integration and reconnaissance in the art market and its bursting in the online world. Today, we speak about a greater independence from the editing room to the online world. Nevertheless, like its early beginnings, the changing technology continues to have a great impact on the development of video content like on many other artistic mediums.